It has been a while since I have made ice cream, so I thought I would give this month's Kavey Eats 'Bloggers Scream for Ice Cream' challenge a go. The theme for November is savoury, ' with the proviso that you can either make a fully savoury ice cream or simply use a savoury ingredient in a sweet ice cream' . Since reading about the challenge I have been toying with a few key ingredients including cheese, carrot, tomato and bread but decided to plump for sweet potato. I realise potato ice cream sounds rather odd but all the talk of Thankgiving this week reminded me of an American friend with a penchant for sweet potato and marshmallow pie.  I had not heard of the dish before but when I looked into it online, I thought why not try an ice cream version. Whilst making this recipe I did keep questioning the point of making it and the idea of savoury ice cream in general but, for me, ice cream is about fun and experimenting with flavours; certainly the case here. Upon tasting the ice cream, it is a little sweeter than I imagined but whilst you can taste the potato it is not too overpowering, so overall I think it works quite well. If you feel like something a bit different then give it a go 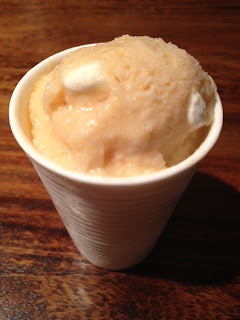 1. Bake the sweet potato in the oven, until very soft, and leave to cool. Scoop out the mixture from the skin and blend until very fine.
2. Make a vanilla ice cream base by mixing the cream and milk in a pan  and bringing it to the boil, before adding the sugar and stirring until it dissolves. Add in the vanilla essence, cinnamon and the egg yolks and whisk together.
3. Fold in the sweet potato mixture and half the marshmallows and store in the fridge overnight
4. Sieve the mixture before placing in your ice cream maker and slowing add in the remaining marshmallows as it churns and freeze for a while before serving.

About Supper and Scribbles

A simple and down to earth blog, where I can share my favourite recipes and write about visits to restaurants and food events in and around Liverpool.
I love homely, relaxing and heartfelt food, with the odd bit of fancy thrown in now and again.
Feel free to join in and give my recipes a go and send me a pic for me to post!